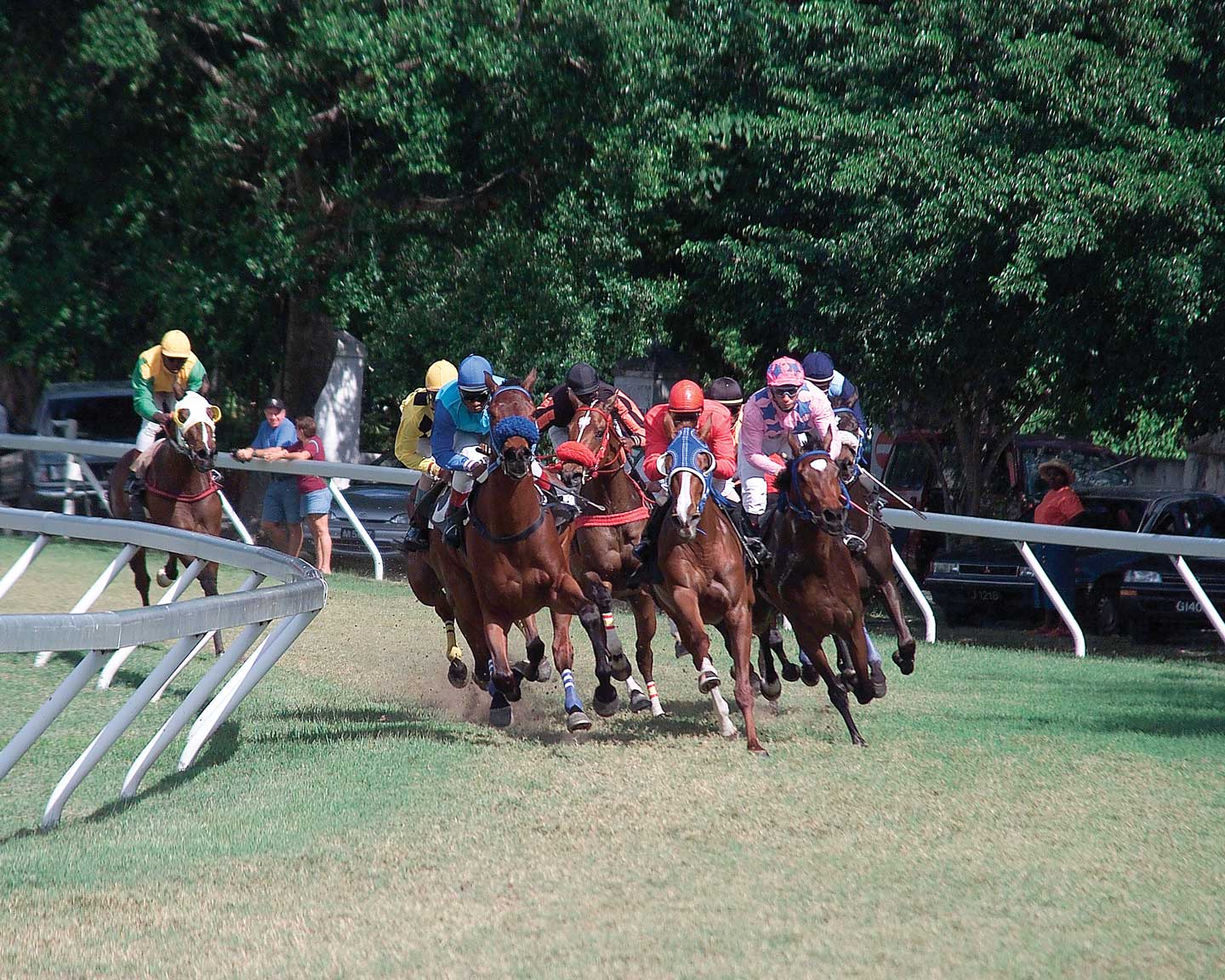 Horse racing first became popular in Barbados back in the nineteenth century, at a time when merchants and planters all maintained large stables because horses were the main means of transport. The early races were usually held at Milkmarket in St. George and Highgate in St. Michael, until 1845 when the local gentry began competing against British Army and Naval Officers stationed at the Garrison, which had once been Britain’s largest military installation in the Eastern Caribbean. It was in a similar manner that other popular British sports, particularly cricket and polo, were also introduced to Barbados.

When the British army left Barbados in 1905, local race enthusiasts founded the Barbados Turf Club (BTC) and started horseracing as we know it today. The first President was Mr. Darnley DaCosta Sr., who owned the famous Jamaican-bred creole Ben Battle that went on to win 15 major races, competing not only in Barbados, but also Guyana and Trinidad.

The popularity of the sport was boosted in 1908 with the building of the first ever Grandstand, even capturing the attention of the racing fraternity in the United Kingdom. Unfortunately, that good progress was disrupted when racing was suspended for the duration of World War One. Upon resumption in 1920, the BTC took another step forward by forming a committee of management to oversee the running of racing in Barbados. That is when owners started importing good quality horses from the UK and the USA, not only to race but also for breeding.

The end result of the BTC’s commendable endeavours over the past century has been the continuous development and growth of a talented racing community of outstanding breeders, trainers, jockeys and grooms. Indeed, the Garrison has become a nursery ground for numerous highly regarded professionals, many of whom have earned international celebrity status.

Most of the jockeys riding at the Garrison in the 1940’s early 1950’s came from England, but that all changed when Eric ‘Sunny’ Holder’ burst onto the scene as the first black Barbadian jockey to ride at the Garrison. Sunny, who was quickly picked up by the powerful Cyril Barnard Stable, rode many great races against his main rival, the Englishman Edgar Crossley. Following in Sunny Holder’s footsteps, Barbadian jockeys such as Challenor ‘Chally’ Jones and Venice ‘Pappy’ Richards went on to dominate the jockey standings from the 1960’s to the early 1980’s. To this day, they are still the only two jockeys to have won 1000 races each while riding in the Southern Caribbean. In 1979, Barbadian Sonia Perkins became the first female jockey to ride at the Garrison. Just three years later, Sonia was also honoured as the first female in the world to win the Jockey Title.

Many of the world’s best jockeys have ridden on the Garrison Track, including Johnny Murtagh and Frankie Dettori. Our own Patrick Husbands was the youngest jockey to win the coveted Gold Cup Race, at just 16 years old, and he has since gone on to win the Jockey Title in Canada many times. He is in good company with a bevy of other local jockeys and grooms who have excelled throughout North America.

The first ever Gold Cup race was held at the Garrison way back in 1921, but only became a prestigious, internationally-followed event in modern times, starting when Hanschell Inniss sponsored the first Cockspur Gold Cup race in 1982. By 1994, international journalists came in their numbers to cover the race which was broadcast live to over 25 million people. When Sandy Lane Hotel took over the sponsorship in 1997, Derrick Smith, one of Sandy Lane’s principals, had the conditions of the race changed to make it more attractive for horses from outside the southern Caribbean to compete. Ever since then, horses from Canada, the USA, the UK and all around the Caribbean have been competing in the race, occasionally beamed live to over 300 million people worldwide.

Such was the popularity of the Gold Cup, tickets were usually snapped up long before the race day, mostly by overseas visitors. It also became fairly commonplace to see world-class trainers at the early morning gallops watching horses prepare for that race, including our very own Sir Michael Stoute, the late Sir Henry Cecil and Richard Hannon.

The Garrison’s unique, small six-furlong oval turf-track provides a very interesting and enjoyable venue for overseas visitors to enjoy a fun day at the races. While sitting in a charming Grandstand built in 1908 and located at the very heart of the Bridgetown and Garrison U.N.E.S.C.O. World Heritage site, spectators are literally surrounded by the island’s history and rich horseracing heritage. It is fair to say there is nowhere else like it in the world. Due to its compact design, you always feel close to whatever action is taking place at the time. Pre-race you can watch owners and trainers saddle up their horses in the paddock. When they make their way to the gates to race, they seem so close you could reach out and touch them. During the race, you don’t just watch the horses running, you can actually hear their hooves pounding the turf and feel the vibrations as they go thundering past. It’s all action, even when the race is over. That’s when the crowd starts to buzz with their post-race verdicts, the runners cool down, the jockeys dismount, the grooms take over and the shouting and celebrating begins, while the winning owners step out on to the track to lead in their prized horses, pose for photos and collect their trophy … and it’s all happening right in front of you.

Thanks to its central location, the Garrison Racetrack is easy to get to, and the pleasant surroundings make it an ideal place for the whole family to share an entertaining afternoon of fun and excitement. Food and drink are available inside the stands or while relaxing on the grounds between races. For those who like a little flutter, there are betting booths available in the stands and on the grounds. And for a bit of racing with a novel twist, thanks mainly to the sterling efforts of Sir David Seale, a stalwart of local horseracing, visitors can even enjoy floodlit racing in the cool of the night.

Special thanks to Charlie Heath for sharing his knowledge of racing.